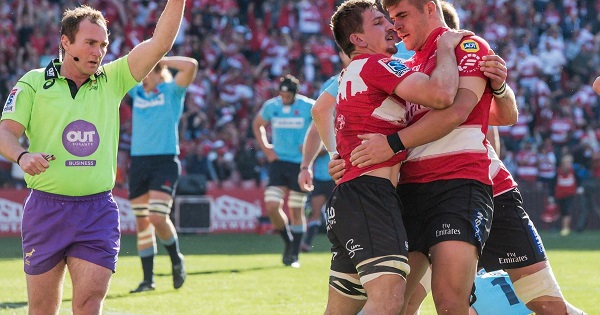 The Lions will be looking for redemption against the Crusaders in a repeat of the 2017 Super Rugby final this weekend in Christchurch. Swys de Bruin’s men come into the match very much as the underdogs, but are determined to cause an upset against a Crusaders side who have only lost twice all season long.

The South African outfit have produced some terrific tries throughout the season and turned on the style to beat the Waratahs in the semi-finals 44-26.

Despite the in-form Crusaders playing with home advantage in this year’s final, De Bruin believes the Lions, playing in their third consecutive final, can be a match for the Kiwis.

“What is vital is to try and not make the occasion too big this time around and just stick to what works for us and find a solution to start better‚” he said.

“I believe in miracles and this team has proven that anything can happen.

“They are a very good team but there is 80 minutes between four white lines and it is going to be an interesting match.”

The Lions will be hoping to make the most of its two star players on Saturday, Kwagga Smith and Malcom Marx. Hooker Marx has shown sensational try-scoring prowess all year with 11 tries, including two against the Waratahs.

Smith has been equally as impressive and has developed somewhat of a cult following for some years now. The Sevens player, who has ambitions to turn out for the Springboks, has been one of the stand-out flankers this season.

As for the Crusaders, their record this season has been nothing short of remarkable.

Scott Robertson’s side have been the model of consistency, with 14 wins out of 16 in their conference and a perfect knock-out stages.

And if they go on to beat the Lions this weekend, it would be their ninth title and first back-to-back triumph since 2005/2006.