Taqele Naiyaravoro banned for taking out Beauden Barrett in the air 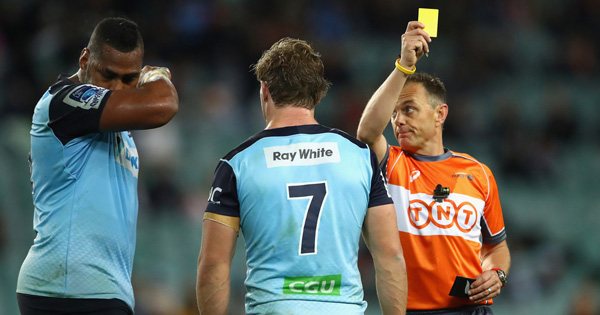 Giant Waratahs winger Taqele Naiyaravoro has been suspended for one week following the yellow card he received for a dangerous challenge against the Hurricanes. When compared with recent incidents, Naiyaravoro was lucky that Beauden Barrett landed the way he did.

Referee Chris Pollock awarded a yellow card for the challenge but the match citing commissioner reviewed the footage and in his opinion, deemed the incident to have met the red card threshold for foul play.

In the disciplinary hearing SANZAAR Duty Judicial Officer Robert Stezner SC accepted a guilty plea from Naiyaravoro, who contravened Law 10.4 (i) Tackling, tapping, pushing or pulling an Opponent jumping for the ball in a lineout or in open play.

“Having conducted a detailed review of all the available evidence, including all camera angles and additional evidence, including from the player and submissions from his legal representative, I upheld the citing under Law 10.4 (i) Tackling, tapping, pushing or pulling an Opponent jumping for the ball in a lineout or in open play.

“With respect to sanction I deemed the act of foul play merited a low-end entry point of 3 weeks.

“There were no aggravating factors.

“As to mitigation, I took into account the Player’s good record, his early guilty plea, the circumstances of the incident itself – including the fact that it was unintentional, the player’s clear remorse, his opponent’s apparent acceptance of these facts and what would otherwise have been a disproportionate sanction to the level of offending.

“I considered a reduction of two weeks to be appropriate, making a suspension from all rugby for one week, up to and including Saturday 16 July 2016.”

Naiyaravoro has been suspended from all forms of the game for 1 week.