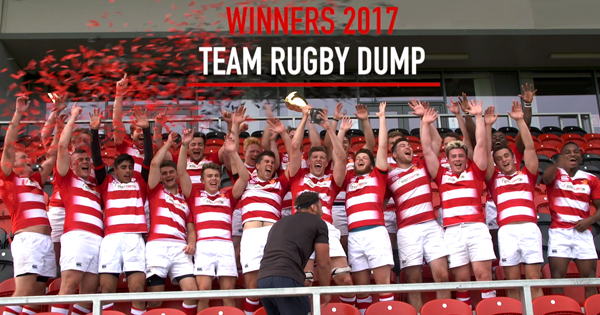 Canterbury’s Rugby Fit Experiment came to an end recently as Team Rugbydump took on Team RugbyLad in the final after 6 weeks of preparation. We’re pleased to say that Rugbydump came out victorious, winning the match 60-14 at Birmingham Moseley Rugby Club.

Team Rugbydump was made up of University of Leicester players, training by Ross Edgely with mentorship from England captain Dyland Hartley, while Team RugbyLad featured Dublin City University and Brian Keane with Robbie Henshaw.

Leicester came out the blocks quickly and started the better of the two teams with club captain Sam Cranswick going over for the first try of the day, before the onslaught continued and winger Declan Nwachukwu picked up a 60m interception try to rub salt in the wounds.

DCU came back with two converted tries, but the second half pace and physicality of the Rugbydump team led to a convincing win, and honours in the first ever Canterbury #RugbyFit final.

Thanks to Canterbury, RugbyLad, Ross Edgeley, Brian Keane, Dylan Hartley and Robbie Henshaw, as well as everyone from the University of Leicester and Dublin City University!

View the recap video below, and below that we’ve included each week’s updates, along with details of how they got to this point, as each week focussed on a different aspect of training

Below are recaps from each week of training, as the boys prepared for the final clash

In the first week of the programme, Fitness Coach, Ross Edgley and Head Coach, Dylan Hartly introduced the RugbyFit Experiement to team RugbyDump as well as putting the guys to the test by doing a fitness test to see what level of fitness the guys were at before starting the Rugby Fit Programme.

The fitness test was a race; 20m Sprint around the rugby posts starting from a press up position then bear crawling back.

This week took place in the gym and was designed to help the lads strength and explosiveness. The exercises were:

The strength fitness test was how many box over burpees the guys could do in a minute.

Flexibility is an area that is often overlooked in Rugby but it is a very useful exercise to have as it can help increase the range of movement as well as help towards muscle damage which is why Ross teamed up with Marley to give a yoga masterclass.

The exercises were designed to really help stretch and focus the body to make it more supple and stop muscles from getting stiff focusing on the key areas of:

The flexibility test was a side plank still failure, the person who holds it the longest is the winner.

Ross took the team to the hills of Leicester to carry out their speed training to help the guys have the competitive edge over Team RugbyLad.

Ross explained that “sprinting is a skill” which not many people understand. Ross deconstructed the movement to get the guys to move as fast and efficiently as possible.

The speed test was a 20m sprint from a press up position to really see how fast the guys were and if they had taken on board their sprinting coaching.

This week was focusing on getting the lads more agile so they have more of an edge in the final which took place at Leicester athletics stadium.

The exercises for the 2 key areas were:

The agility test was:

–    Starting from a press up position, sprint in and out of the poles, focusing on changing direction quickly, burpee at the end and then sprint all the way back to see who gets the fastest time.