That time Barrett stopped a rampaging Tuilagi, and sparked a huge debate

We’ve covered the Tuilagi brothers extensively over the past few days, and for good reason. The first family of Samoan rugby have become a neverending viral sensation. They are the gift that keeps on giving. Has anyone ever been able to stand in the way of such brute force, deliver a shot, then live to tell the tale?

Danny Barrett certainly fits the bill and is no stranger to delivering massive viral shots, himself.

Though more of a 7’s man these days, he’s been known to suit up a time or two with the USA Eagles XV side. Like Alesana, his reputation now precedes him as he’s also capable of leaving a trail of destruction in his wake.

Thankfully for us, these two met in a crunching collision at the 2015 World Rugby Pacific Nations Cup, where Samoa edged the US 21-16 on the back of some good play from the Tuilagi brothers.

Barrett made sure Alesana would remember his name as he caught Tuilagi with a full head of steam, knocking him clear into touch after the latter had already run through several Eagles. Granted the big man never left his feet, and there were no arms, but this type of collision is usually slanted the other way.

Though not a true “tackle”, it surely doesn’t lessen the force of the impact, especially given that it stopped the try.

Given the same scenario, many would probably be thrilled to shoulder Alesana Tuilagi into touch without being stretchered off.

ALSO WATCH: Alesana and brother Vavae Tuilagi cause damage against the USA 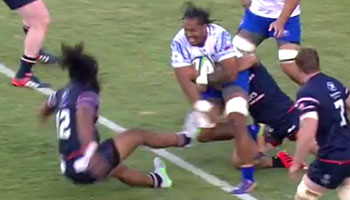