The Best of the 7s vs The World series 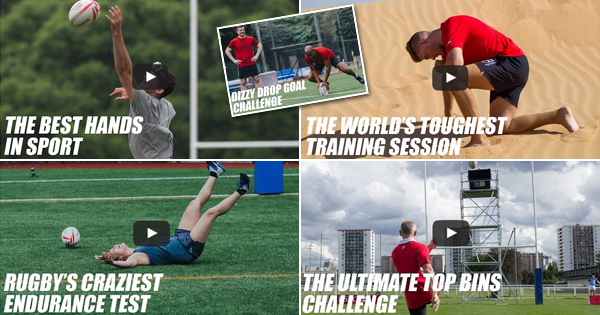 While the HSBC World Rugby Sevens Series is now wrapped up, with South Africa taking the overall title, today we take a look at some of the amusing and insightful videos that series sponsor HSBC have put together, with their 7s Vs The World series.

The shortened format of rugby is without a doubt one of the most dynamic, entertaining and high-flying sports, but the levels of fitness and preparation that go into it are seldom seen by fans.

These short episodes, hosted by Sean Maloney and Ben Ryan, give us an insight into how top sevens players prepare, and there is also the hilarious dizzy drop goal challenge, attempted by HSBC ambassadors Brian O’Driscoll, Jason Robinson and George Gregan.

That has already started a bit of a craze, and was recently attempted by Scotland Rugby.

Episode 2 – The Best Hands In Sport

Recreating real-life, spectacular displays of handling from Rugby Sevens matches gone-by, a select few sportsmen and women are pushed to their limits Down Under by Sevens experts Sean Maloney and Ben Ryan. Some big hits, bruised egos and great displays of skill.

Think you’ve got good endurance? Think again. It’s a killer endurance test as a group of sports fans experience pain and ‘jelly legs’ like never before, finding out first-hand just how hard Rugby Sevens players work while keeping their skills and wits sharp.

Brian O’Driscoll, George Gregan, Jason Robinson and Ben Ryan take on the Dizzy Drop Goal Challenge from Episode Three of 7s vs The World with some impressive and hilarious results.

Think your precision kicking is on point? Watch as rugby legends and sevens fans go up against the ultimate top bins challenge as we set out to prove just how skilful Rugby Sevens players are.

Kicking is a part of sevens that is growing in importance – as noted when Kenya reached the final in Singapore 2016 (to go on to win the tournament) with a last minute conversion.