The Brumbies upset the touring Lions with historic victory in Canberra 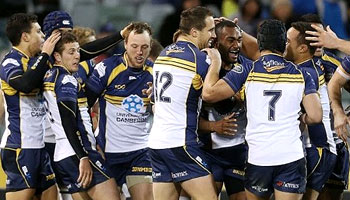 Brumbies coach Jake White has described their 14-12 victory over the touring British and Irish Lions as one of the highlights of his life. It was the first midweek loss by the Lions since 1997, when they lost to Northern Transvaal in South Africa.

The Lions lost to an Australian provincial side for the first time in 42 years as their 2013 winning run came to an end with what coach Warren Gatland has called a ‘reality check’.

The Kiwi coach picked somewhat of a scratch side to face the Brumbies, including no less than four players that had joined the squad just days prior to kick-off in Canberra.

The Brumbies themselves weren’t at full strength however, missing the majority of their Wallaby players and fielding an inexperienced outfit, an aspect that thrilled coach Jake White.

“It’s as high as it gets,” said White after the famous win. “I’ve been lucky enough to win a senior and junior World Cup, but to beat the Lions, especially the way it was done, with a group of boys with 28 Test caps, of which one player (Clyde Rathbone) has 26, and [skipper Peter Kimlin] two.

“It’s got to be as good as it gets in rugby union. It’s a massive result. This is a very young group of players who only got together 18 months ago and no one would ever have dreamt that we would have achieve Super Rugby-wise but to also get a win against the Lions doesn’t happen.

Warren Gatland said that they lacked urgency and intensity in the first half, but there were positive signs in the second that they will be taking forward to the first Test on Saturday.

“It’s part of being on tour. You regroup after you get a bit of a knock and you take your disappointment and it’s how you respond to it, how this group of players respond to it this weekend. It’s a reality check.”

Do you think the Wallabies now have the psychological edge going into the first Test?