The Fastest ever tries scored from the kickoff 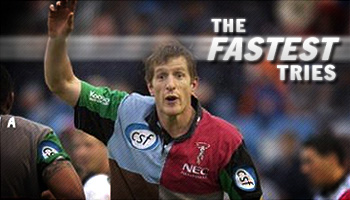 As promised yesterday on the RD Facebook page, today we’ve got a pretty cool clip for you that goes through some of the fastest tries ever scored from the kickoff.

The guys at the Super 14 highlights show on Sky Sports put together a little bit about the quickest tries ever after Lionel Mapoe scored one after 20 seconds against the Bulls recently.

They then showed some of the other fastest tries on record, including Keegan Daniel’s 16 second effort against the Blues in 2008, and Vula Maimuri of the Highlanders scoring after just 12 seconds against the Crusaders way back in 2001.

The focus then turned to the try that they thought was the quickest ever, as Tom Voyce scored after 9.63 seconds against Harlequins in 2004 as (in studio guest) Will Greenwood dropped the ball from the kickoff.

As you’ll see though, they got it wrong as they totally forgot about Lee Blackett’s effort for Leeds Carnegie against Newcastle in 2008, coming in at an incredible 8.28 seconds.

There was another very quick try that was scored by John Leslie for Scotland against Wales in 1999, but that was over nine second if memory serves correctly, so we think we’ve got it right.

Does anyone know of any officially quicker than Blackett’s though?