The infamous Hand of Back incident of 2002 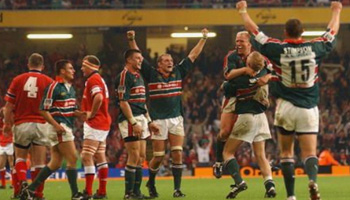 The 2002 Heineken Cup Final will be remembered as a match that ended in a heap of controversy as an incident took place that tarnished a players reputation with Munster supporters for possibly the rest of time.

It was Munster up against the Leicester Tigers in the show piece of Northern Hemisphere rugby, with Leicester leading 15-9 with time on the clock virtually up.

Munster had one last chance of an attack, with a scrum deep in the opposition half. As Peter Stringer went to put the ball in, the referee was unsighted, which led to Leicester flanker Neil Back illegally slapping the ball back onto the safety of his side of the scrum.

It caused the turnover, which resulted in the game coming to an end shortly afterwards, and Leicester winning the Heineken Cup.

Leicester boss Dean Richards saw nothing wrong or illegal about what hed done, while captain Martin Johnson said that those type of things always happen, its just that this time, it was seen clearly on TV.

“If it gives an advantage to your team, obviously you’re going to say ‘great,’ and if the opposition do it you won’t be happy, but these things happen – just not always in the last minute of a major final.”

The Munster press and fans were livid though, labelling Back a cheat, to which he responded remorsefully shortly afterwards.

“I have to be honest about it. I don’t like people thinking I’m a cheat. I don’t want that slur. I’m not a cheat. I had a lot of mail over that incident, mostly negative. There were letters saying I was a cheat, some of them from Leicester fans, which was a bit hurtful.

If people wanted to make me feel bad about what happened, they have. That’s disappointing and I know it upset my wife, Alison. If I thought there was any possible way of redressing it, I would consider it. I regret it because I don’t like to think that, because of that one incident, there are people who think I’m a cheat.”

“It has tarnished my reputation. In making any judgment, I would hope people will evaluate me over my whole career and not label me on that one moment. It happened spontaneously. I weighed the options up in a split-second and did what I did.”

Note:  Commentary from Austin Healey, who is seen kicking the ball out at the end.

Thanks to the contributor who made the effort to get the clip up and submit the link.