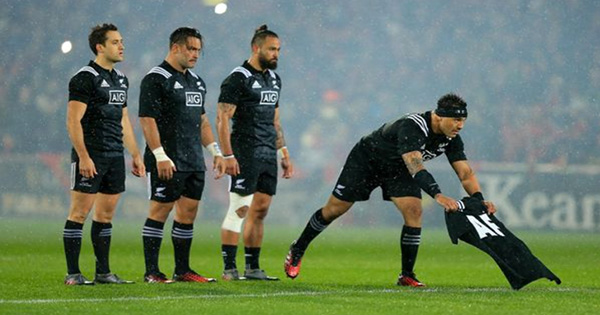 As the Maori All Blacks have now wrapped up their end of year tour, we look back on a special moment of class and great sportsmanship that occurred before their match with Munster last weekend.

On Wednesday evening, the Maori All Blacks beat Harlequins at Twickenham Stoop 26-10. And while they indeed ended things with a victory, it was a tour of ups and downs.

They ran riot over the USA, but were then beaten by Munster on a highly emotional occasion.

There have been some rather significant distractions for New Zealand Rugby of late, the latest of which was accusations from former All Black Craig Dowd of a “disrespectful” Haka before the Ireland match.

However, none of that mattered in the moments before – and since – the match against Munster as the Maori All Blacks performed an incredibly touching tribute pre-kickoff to honour former Munster coach Anthony Foley, by placing a jersey on the turf with the initials “AF” on the back.

Once the Haka was completed, Ash Dixon took great care in his handling and offering of the jersey to Foley’s two small sons, who no doubt have had a whirlwind few weeks.

This moment was a chance for all fans to celebrate what the game is truly about – respect, even in the face of battle.

Blues name young team for final round clash versus Waratahs

The Blues have taken the opportunity to mix experience and exciting youth in their line-up for the final round clash against the Waratahs in Sydney in the DHL Super Rugby Pacific competition on Saturday.