The Rugby Club RWC Plays of the Tournament 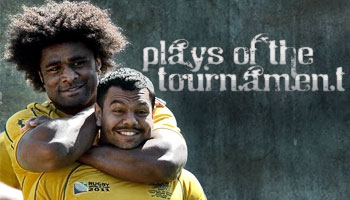 There’s not long left now till the 2011 Rugby World Cup is done and dusted. It’s been fun, and while there’s been a few upsets, a fair share of controversy, and some teams underperforming, there’s still been a bagload to enjoy, both on and off the field.

In this week’s Plays of the Week from the Rugby Club, we’re taken through their Plays of the Tournament, with some of the biggest hits, best tries, and a few other interesting bits.

Not included in this week’s segment is the third place playoff between Wales and Australia, and then obviously the final, because that hasn’t been played yet. It looks like that’s also the final show of the year for the Rugby Club, which is a great pity but also a good time to say thanks to them for the good work.

It’s also a good time to mention that you can access all (most of anyway) the previous Plays of the Week’s that have been featured on here by following the category text link below this video. It’s there next to ‘Posted in‘, and you’ll also find them listed on the sidebar to the right, so feel free to browse around.

Make sure you stick around after the tournament as the coverage won’t end there, and there’s still loads of great rugby going on elsewhere, with the Currie Cup final, Top 14 in France, Aviva Premiership, the Rabodirect Pro 12, and then of course the much anticipated Heineken Cup, which kicks off in three weeks time.

Enjoy the clip, and the Rugby World Cup Final between New Zealand and France. Cheers.