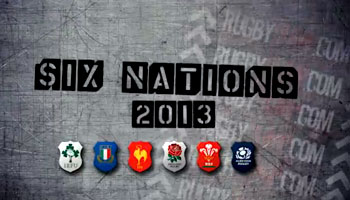 As we head towards another jampacked international season that includes a Lions tour amongst other things, here’s our fast-paced take on some of the most memorable moments from the 2013 Six Nations Championship. We’ve also got some stats for you.

Despite early predictions, Wales surprised everyone as they came from behind to find their feet, culminating with a thrilling victory over England in Cardiff. While they weren’t able to repeat their Grand Slam feats of a year ago, they showed that when it comes together, they’re a serious force.

As Scotland head coach Scott Johnson said, “Statistics are a bit like a bikini – it shows a lot but not the whole thing.” With that in mind, here are some random stats from the tournament.

Points – Top points scorer, and most people’s pick for Lions fullback, Leigh Halfpenny. He scored 74 points in the five matches he played, averaging a very handy 14.8 per match.

Age –The Youngest Player in the tournament was up-and-coming French star Gael Fickou, who made his debut at just 18-years-old. Stuart Hogg, another solid performer, is still just 20, while George North, believe it or not, was also only 20 at the start of the tournament.

Tries – As games seem to be more evenly matched now than in the past, try-scoring has been on a steady decline. A total of 37 tries were scored, the lowest in 18 years. In the opening round of this year 16 tries were scored, but the last three rounds combined amounted to less than that.

Discipline – Despite struggling, France were actually the most disciplined side in terms of cards, as they didn’t have a player sinbinned the entire tournament. Ireland had the most sent to the sideline, as they received 5 yellow cards. There we no red cards dished out in any of the matches though.

You can view a comprehensive tournament stats analysis by the IRB here.

Time: 2:32
Thanks again to Tim Freudenthal for the great work

Sale win at Gloucester to maintain pressure at the top

.Sale maintained second place in the Premiership and moved four points behind Exeter after beating Gloucester 23-17 at Kingsholm.