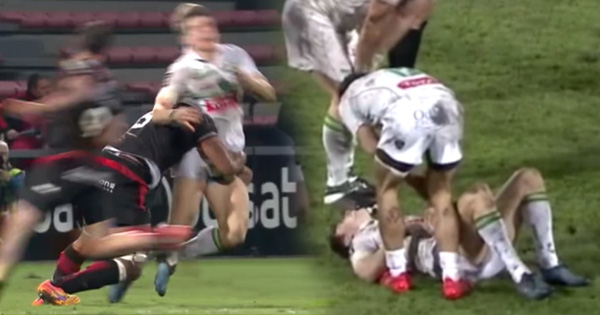 Now retired from Test match rugby, former French captain Thierry Dusautoir is still making a big impact at domestic level, as seen here with this crunching tackle on former All Black, Colin Slade. The Toulouse captain caught him unawares, knocking the wind out of him for a second or two.

It followed a typically brilliant turnover by Steffon Armitage, who got over the ball with lightning precision to win a turnover, before Pau’s quick tap led to Slade’s demise.

While Dusautoir retired from international rugby at the end of 2015, the skipper is still playing at an alarming standard, considering he is now all of 35 years old.

This is likely to be Dusautoir’s final season for Toulouse, but before he hangs up his boots, he will lead them in their quest for European glory, starting with the European Champions Cup quarter final against Munster at Thomond Park in April.