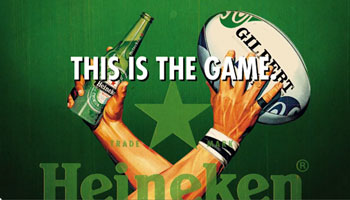 Legends of the game Scott Quinnell, Zinzan Brooke, and Matt Burke chat to Will Carling this week about, you guessed it, the Rugby World Cup final. That’s not all though, as they have a few interesting stories to tell. Loads of banter, predictions, and laughs.

You may have seen one or two of these great Heineken bits before. This week the boys are joined by Burke in person, rather than via Skype. It makes for great viewing as the four test veterans tell rugby stories from their playing days, and discuss the key talking points from the RWC.

Of course those major talking points are the Warburton red card and the upcoming final. Wales have moved on though – unlike some of the fans and media it must be said – and now have to focus on the bronze medal match against Australia.

While third place is up for grabs, naturally the final is the main focus and Zinzan gets back onto another contentious topic, and the infamous story of how the All Blacks got food poisoning ahead of the 1995 World Cup Final. His story differs slightly from a few others who have told the tale, but it’s interesting to hear nevertheless.

Welsh legend Quinnell pulls no punches himself, stating that the 2011 French team are ‘the worst side ever to get through to a World Cup Final’, which he says is good news for the England 2007 side, as they no longer hold that title. There’s also a great story from Burke about meeting the Queen, and Quinnell about his lucky pants.

For more insights and analysis from the Heineken Ambassadors into Rugby World Cup 2011 in New Zealand, please visit www.thisisthegame.com.