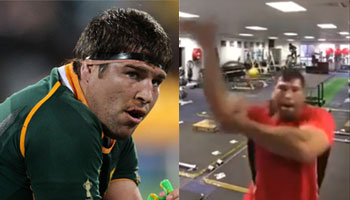 Willem Alberts is not on tour with the Springboks and has been sorely missed of late, particularly against Ireland in Dublin. While he’s currently out injured, it looks like things are healing well as he showed in this clip that has gone viral.

Alberts, affectionately known as the Bone Collector, has been an integral part of the Springboks loose trio in recent years. His injury absence has meant that South Africa are without a big hitting, strong carrying flanker. But, at least we all know he’s working hard to get back in contention.

As this video shows, he gets to the gym early, so early in fact that there’s nobody there yet.

Rehab from injury can be a lonely, difficult situation to be in, so what does one do when alone in the gym early in the morning, as the video says? You do just what you want, which is exactly what he did, to the thumping tunes of the Guru Josh Project.

He’s never come across as being all that much of an extrovert (not publicly), but clearly the Sharks forward can bust a move, and isn’t shy to film it. Thanks to a few sources that got hold of it and uploaded, we can all enjoy the 40-odd seconds of this giant of a man tearing it up in the gym.

If you hadn’t realised, he’s speaking Afrikaans, so directly translated he says: “Hello group… What do you do early in the morning when you’re alone in the gym? You do just what you want.”

It’s hardly the Juan de Jongh vs Terry Crews dance off, but great to watch anyway.

SARU said recently that Alberts will be considered for the later stages of the tour if needed.