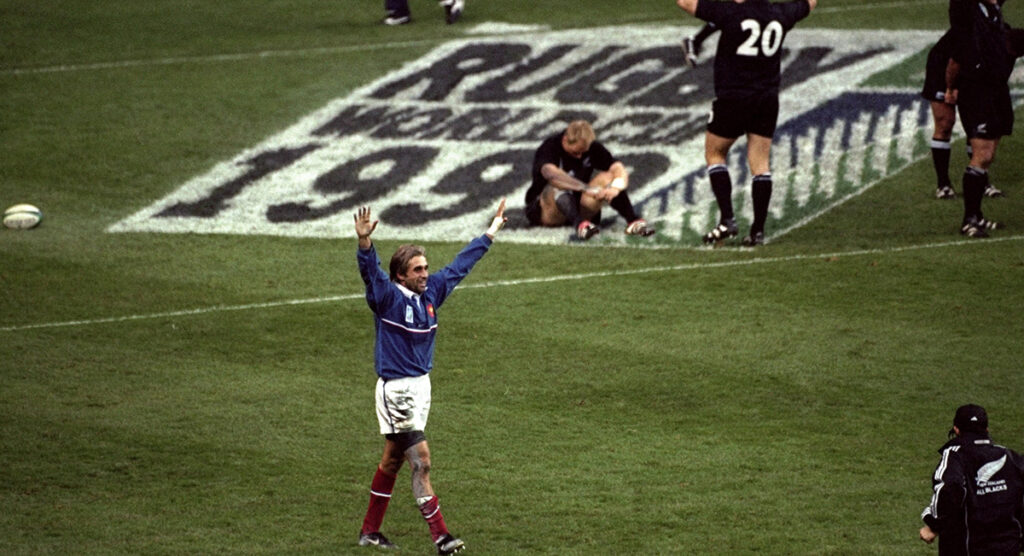 The cliched rugby expression “the French are predictably unpredictable” may well be true, but there is more to it than that. A full analysis of what makes the French so French would take hours, maybe days. So here are three tries which attempt to explain this phenomenon.

We all know that a line break is only as good as the supporting runner, and France have showcased just how important this facet of the game is in getting across the whitewash.

They’re not the only team which utilises this of course – and almost every Tier 1 and Tier 2 nation now adopts an attacking strategy based off of it – but when France get it right, they are other-worldly.

France in the early 2000s was, alongside England, the stand-out team in the 6 Nations and their 2004 Grand Slam proved that. At a time where the domestic clubs were also dominating the European scene, it was no surprise that they played with flair and charisma.

Jean-Baptiste Ellisalde’s try against Wales in Cardiff was a prime example of how a support line can completely draw in defenders to produce a try.

Betsen made the break while Ellisalde was initially covered by Welsh out-half Stephen Jones. But a quick decision from the scrum-half to change his course and run down the blindside, along with Betsen’s slick reverse pass nullified Jones’ defensive threat and left winger Gareth Thomas with far too much work to do to stop Ellisalde sprinting away.

This is one of the many famous tries scored by the French in THAT semi final in 1999. What is impressive is not the fact the winger Bernat-Salles out-sprinted Jeff Wilson to touch down, but the fact that flanker Olivier Magne probably would have done likewise to score himself, such was the pace of the back-rower.

It was built on a solid line of French defence and, now firmly rattled, New Zealand coughed up possession through Andrew Merthens and Tana Umage.

Hacked on first by Christophe Lamaison and then Magne, the latter had the legs to finish the job off, but Bernat-Salles, rushing from the opposite wing, demonstrated why you should always chase a loose ball.

France produced one of the biggest Rugby World Cup knock-out stage upsets to stun the All Blacks 43-31.

Over the last few years, France got pretty lost in their game and largely struggled to implement a structured game which worked so well for England and Ireland, particularly in the 6 Nations.

Thankfully, the game seems to have switched from defensive pods and territorial strategy, to a full-blown ‘all 15 players’ attacking structure, which arguably suits the French style.

That’s starting to bear fruit with the current generation of French players and last year’s World Cup match against Argentina was another good example.

France has the likes of Fijian talisman Virimi Vakatawa, Clermont sensation Damian Penaud and Toulouse’s Antoine Dupont, and they all contributed to scoring a superb try against Los Pumas.

This was a simple try really, but each player had to do their jobs: Vakatawa is involved twice, as is Penaud (and his initial offload to Dupont in the tackle is not to be underestimated either), while Maxime Médard give and take sets the Penaud down the line.

Dupont is the perfect support runner and is on hand to waltz into the open space create by Penaud to score.

It’s the boring old mantra of “French Flair” but what they are really doing is playing to their strengths. The structure, defence-first style of game has never suited the French (despite their forwards being more than able to assume that post).

Instead, they appear to be most comfortable reverting back to running into space, committing defenders and using the pace of backs and wing forwards alike to punish their opponents. And we can’t wait to see them in action again.