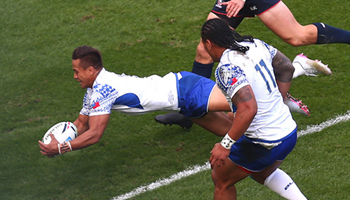 Samoa got their Rugby World Cup 2015 campaign off to a comfortable enough start with a 25-15 victory over the USA in Brighton. The United States scored one of the tries of the weekend, but ill-discpline prevented them from really challenging the Pacific Islanders.

Tusi Pisi kicked 12 points, while star fullback Tim Nanai-Williams and forward Ofisa Treviranus scored the tries, either side of half time. Chris Wyles scored the try of the game after a stunning break out, while Chris Baumann also crossed for the USA.

Samoa now top Pool B alongside Japan, who famously beat South Africa on Saturday. Both sides are on four points, with Samoa facing the Springboks on Saturday, followed by USA vs Scotland on Sunday.

“It was tough but it has set us up for the next game. The South Africa loss to Japan showed that all teams at the World Cup have quality,” said Treviranus post match.

View Samoa’s traditional war dance, the Siva Tau, on the next page, as well as the post match chat with a bruised and battered looking Treviranaus.

Leinster’s forwards hogged all seven tries for themselves in a runaway 50-15 United Rugby Championship victory over the Scarlets at the RDS.

Edinburgh held on against a late Bulls rally to pick up their second win of the United Rugby Championship at the DAM Health Stadium, winning 17-10.

'Whether he is in the England squad is not my call'

Luke Cowan-Dickie gave England cause for concern when he limped out of Exeter’s 27-23 victory at Wasps after rolling his left ankle, with Eddie Jones announcing his squad for the autumn internationals on Monday.