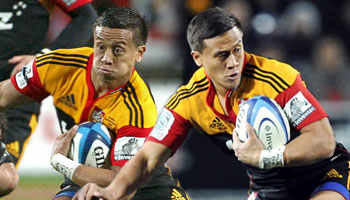 Chiefs flyer Tim Nanai-Williams scored two spectacular tries at the weekend as the defending Super Rugby champions beat the Highlanders 41-27 in an incredible game of rugby that featured all out attack for the full 80 minutes.

Nanai-Williams, the cousin of former Chief Sonny Bill Williams, usually plays in the outside backs but was moved to centre as resources were depleted and coach Dave Rennie saw the potential.

“He’s bloody quick as an outside, so as a centre he’s lightning,” said Rennie after the 23-year-old’s first game there, a preseason encounter with the Hurricanes.

His first try against the Highlanders came about from first phase ball as Ma’a Nonu made an uncharacteristic error, allowing speedy Nanai-Williams to dart through the gap before an outrageous goose-step beat the last man, All Black Ben Smith.

The second try was totally different, and as it was described this week, was possibly the best three minutes of rugby you’re likely to see. It came from a restart after a Highlanders try, and in terms of entertainment value, it certainly was right up there.

The long period of non-stop play included a few turnovers, incredibly quick ball from the breakdown, and some great offloading before an error allowed Nanai-Williams to pounce, bringing relief to everyone out there with his second step and try of the night.

The advantage played by Steve Walsh was excellent and the persistant speed and tempo of this game, before you judge the defence, was unbelievable. At 27-28 and with twenty minutes left, it’s not surprising things opened up as they did.

Nanai-Williams collected the most running metres of the game with 150, while as a team the Chiefs made 87 percent of their tackles, with the Highlanders making 80 percent of theirs.

It was actually quite a challenge deciding which of the two tries to feature here, as both are really good for different reasons, but we’ve gone with the crazy few minutes try, then placed the solo effort straight after it in a playlist. Hit play once, and both will play.

There were a few other great tries scored, so you can view Highlanders vs Chiefs highlights here. You can also catch up on all the other Round 2 Super Rugby highlights