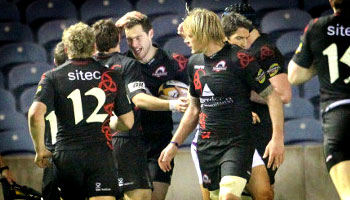 Dutch winger Tim Visser scored another excellent Magners League try for Edinburgh as they beat Ospreys 23-16 at Murrayfield on Saturday night. Edinburgh were trailing 13-3 at one stage.

Jim Thompson and wing Visser both scored, which along with the boot of Greig Laidlaw, helped seal the win for the Scottish side.

Visser, who will be eligible to play for Scotland next year, finished off a wonderful flowing move that went from right to left before coming back to him in space on the wing. He then rounded British & Irish Lions winger Tommy Bowe without any troubles.

Next year cant come soon enough for Visser, and Scotland fans, as hes sure to be in the reckoning come selection time. “I spoke to Andy Robinson and he asked if I would be prepared to play. He said that if I keep improving there is a chance,” he said.

“If I get the chance to play for Scotland I’ll sing Flower of Scotland to honour the tradition and to pay respect to this country. My team-mates asked me the lyrics not too long ago and I think I managed the first two sentences. I’ll have to work on that.”

Hes said that while not being involved, he enjoyed watching the Six Nations recently.

“My dad played 66 times for the Dutch national team so I grew up with rugby watching him play. Every year we would tune in for Six Nations coverage.

“This year, I particularly enjoyed Italy versus France. The Italians have tried so long to beat one off the big teams in the Six Nations and in a tense match they finally did it.

“The look on their faces after their victory was priceless,” he added.

Note: The commentary is in Scottish (Gaelic), as well as a bit of English at the end.