Top 14 Round Five - Best of the weekend wrap-up 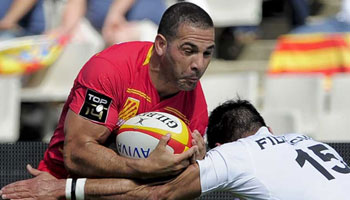 We have already featured one of the games of the weekend, as Toulon beat Montpellier with some lovely tries, so today the weekend wrap features just two of the best from the Top 14, with Bordeaux vs Stade Francais, and Perpignan vs Toulouse.

Bordeaux-Begles picked up an impressive 30-22 win over Stade Francais as they scored through Heini Adams and Felix Le Bourhis, with the latter scoring a sensational try as he linked up well with his winger before taking a return, no-look pass.

Paul Williams scored a try for Stade Francais, while Jerome Porical kicked 17 points with the boot, but it was the two tries to Bordeaux, and good goal kicking from Adams and Camille Lopez that proved the difference.

Perpignan overcame Toulouse with a four-try bonus point in the first half, and a 29-6 halftime lead thanks to tries from Farid Sid, Bertrand Guiry, Guilhem Guirado, and Alasdair Strokosch.

Former Wasps flyer Richard Haughton then scored a try after a sneaky quick tap, before Toulouse came back with a penalty try and a well taken effort by Yannick Nyanga.

The entertaining game ended with Toulouse suffering their second defeat of the season, and Perpignan taking the fairly convincing 34-20 victory.