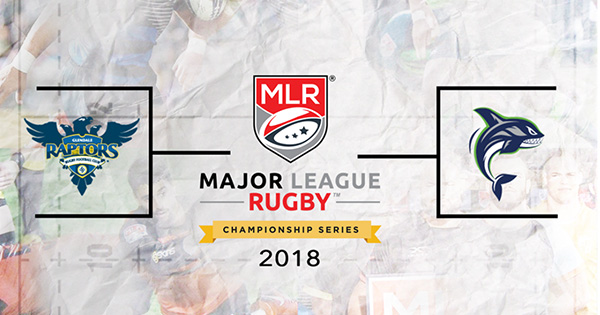 The USA’s Major League Rugby will host its first ever championship final as the Glendale Raptors and Seattle Seawolves have advanced to compete at Torero Stadium in San Diego this coming Saturday night.

It should prove a fitting conclusion for what’s turned out to be an exciting first season. Starting in April of this year, the season was played out over 10 weeks, with the top four teams advancing to the opening round of the Championship Series in Denver.

Major League Rugby looks like a marked improvement over its predecessors with good organization, crowds, production and quality play. Another key has been partnering with CBS.

From a statement on its website: “MLR is the pinnacle of American rugby, and provides a rallying point for local communitites, a focal point for American rugby fans, and an aspirational destination for young athletes.”

This overall attitude will no doubt serve to draw more attention both nationally and internationally. Just this past May, it was reported that US Eagle Chris Wyles was potentially interested in a move after retiring from Saracens, along with Northampton Saint and England international Ben Foden.

The league already enjoys some big names like Todd Clever, Takudzwa Ngwenya, Pedrie Wanneburg, and Joe Pietersen – who’s spent time with the Sharks, Cheetahs, and Stomers in Super Rugby, and who scored a brilliant try in last week’s opening playoff round.

In the meantime, the fledgling league will see its way into the history books this coming Saturday and hopefully will have what it takes to remain a viable option going forward.

All of the US national teams seem to be enjoying success at the moment, so perhaps we’re witnessing the corner being fully turned and a nation coming alive.

The MLR Championship will broadcast live at 9 P.M. EDT on CBS Sports Network