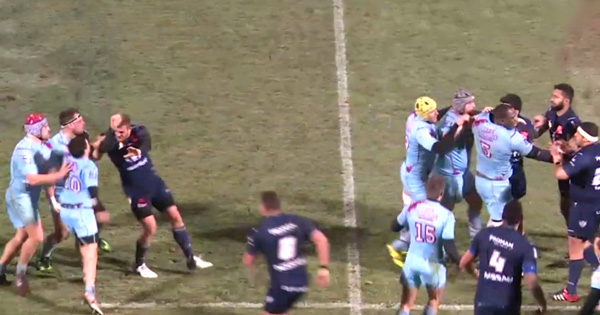 ProD2, the French second division, returned with a bang as Colomiers beat bottom of the table Bourgoin 42-5 in a one sided encounter. With Colomiers leading comfortably late on, an off-the-ball scuffle between a few players quickly escalated into a full-on mass brawl.

The incident forced referee Ludovic Carrillo to stop play as both teams got stuck in.

In what the French call a “baggare général”, these ugly scenes marred the closing minutes. Several punches were thrown, with some landing with force.

Justifiably, the two main insitgators Damien Weber (Colomiers) and Jean-François Roux (Bourgoin) were shown yellow cards for their punches. As of yet, neither player has been cited.

Were yellow cards the right decision?