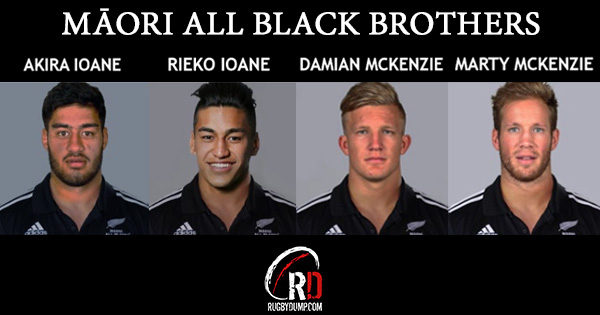 The Maori All Blacks team to play Fiji in Suva on Saturday features two sets of brothers in the starting fifteen and nine new caps in total. Charlie Ngatai will captain the side, fresh from his All Blacks debut against Samoa yesterday.

The new caps include the Ioane brothers, Akira and Rieko (18 years old), and Tawera Kerr-Barlow who is returning from a long injury enforced break. Chiefs back Damian McKenzie will also make his debut at fullback alongside his brother Marty, making for a rare set of four brothers in the Maori All Blacks jersey.

There are also six players from the Hurricanes and Highlanders who appeared in Saturday’s Investec Super Rugby final.

Coach Colin Cooper said the short assembly time had been challenging for the squad, but he was pleased with how quickly the players had gelled as a unit.

“We have a good mix in the team to take on Fiji. There are players who have come out of the Super Rugby finals series in great nick and those who have had a bit more of a layoff so I think that will work well for us. It’s great that we are also able to field some of the exciting, young players we’ve brought into this team and I know Saturday will be a very proud day for them.

“We’re certainly fit and raring to go against what we see is a very strong Fijian team so we’ll need to be at our best to honour our record against international teams.”

The Maori All Blacks have played against Fiji 28 times in total, winning 19 times and drawing twice.

Maro Itoje fired a warning shot from history to brace the British and Irish Lions for a backlash from South Africa as they look to complete a famous series victory over the world champions.