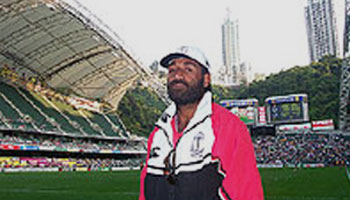 This sensational last minute try by Fiji’s Tomasi Cama wins them the cup at Hong Kong in 1990 against the All Blacks, which features a young Waisele Serevi.

It’s widely regarded as one of the best Sevens tries of all time, considering how valuable a try it is, in the final.

Vesi Rauluni throws the wild pass to Waisele Serevi with the defence closing in. Serevi quickly taps it over his head to Noa Nadruku, who throws it between his legs to the flying Tomasi Cama who runs around All Black winger John Gallagher for a try between the sticks.

Cama is apparently a coach these days, but if anyone has any more info please let us know.