U9 kid goes into BEAST MODE and nobody can do a thing about it! 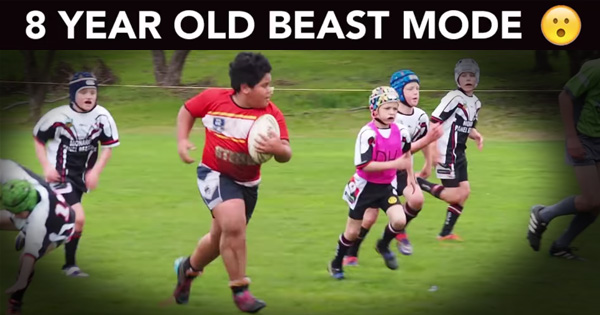 Yesterday we received a video from a guy in Australia, Moroni Martin, who was filming at an Under 9’s tournament in Canberra and happened to see this little beast in action. The guys at USA7s put a quick video together, and that has since gone epicly viral.

The video features a young player named Meaalofa ‘Rayson’ Te’o absolutely demolishing the opposition, showing great power, speed and even stepping on his way to scoring a number of tries.

His team, the Doveton Steelers from Dandenong in Victoria, made it to the grand final of the gala day in Canberra and won the match 20-10, and according to one of those in attendance, “The team was humble, talented and showed amazing sportsmanship”.

As with all things that go viral on the internet, this too brought out a lot of haters, which is unfortunate as the little guy was just doing his job, and by all accounts has been incredibly humble.

As said by the man that captured the footage, “He uses his strengths to his advantage, as do the other kids, and when both get to have opportunities to play to their strengths they feel good about themselves. This is a very short clip that only shows some of his more obvious strengths.

“But not all tackles are made, not all tries are scored – that is just part of sport. Teach them it’s ok! As an adult it is never ok to put any of the kids down.

“The best assessment comes from people who were there and as mentioned, it was a great game and all the kids were smiles at the end of it.”

If the facebook video above does not work for you, you can see it on page two here

U9 kid goes into BEAST MODE and nobody can do a thing about it! | RugbyDump - Rugby News & Videos