Unreal solo try by Chris Latham vs the Highlanders in 2005 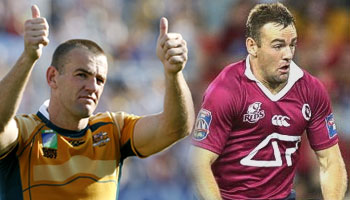 Hard running Australian fullback Chris Latham will be on his way to English club side Worcester Warriors next season after signing a two year contract earlier this week.

32 year old Latham is in the peak of his career currently, and despite an offer from the Australian Rugby Union to get him to stay, has decided to further his career with a new challenge in the English Premiership.

Latham will join other Southern Hemisphere stars such as Rico Gear, Greg Rawlinson, Sam Tuitupou, Thinus Delport, and Loki Crichton to name a few. Latham, referred to by some as the best fullback in the world, is raring to go, stating that he’s looking for a new challenge at this stage in his life after spending a highly successful ten years with the Queensland Reds and the Wallabies.

John Roe, Reds teamate and captain, says that Latham, the second highest try scorer in Australian test history, is in the best shape of his life and will add huge value to the Warriors ambitions.

Immense strength and speed on the counter attack, Chris Latham would pretty much walk into any international side with his freakish talent, speed, and determination.

Look at the fantastic leg drive that got him to the tryline in this 2005 Super 12 game against the Highlanders.

Note that he palms off a forward, has a winger on his back, palms off the fullback and still manages to score this incredible Reds try that sends the Aussie commentary team into raptures.