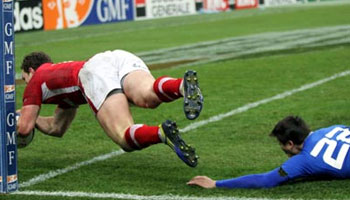 Wales ended an eight-match losing streak with a hard fought 16-6 win over France in Paris on Saturday. The only try of the game was scored by George North from a perfectly placed Dan Biggar crosskick late in the contest.

Pre-tournament favourites France were expected to bounce back from their surprise defeat to Italy last weekend but coach Philippe Saint-Andre instead faces the reality of having lost their opening two matches in the Championship for the first time since 1982.

In an error-strewn match that could best be described as attritional, Wales won in Paris for just the fourth time since 1975, giving coach Rob Howley his first win in charge.

It was all square at halftime at 3-3, with the biggest talking point being the Stade de France pitch, but a superbly converted North try in the second half gave Wales the lead they needed.

Fullback Leigh Halpenny added to his earlier conversion with a superbly taken long distance penalty late in the game, which despite France’s late surge, put Wales out of reach.

“Words cannot describe how much this means – what a fantastic feeling,” said Halfpenny.

“The boys played unbelievably well. We dug deep to get this fantastic win – it’s been a long time coming,” added the nuggety fullback, who picked up the well deserved Man of the Match.

France now face the daunting prospect of away matches against England and Ireland as they hope to avoid the wooden spoon. “We are at the bottom of the Six Nations,” Saint-Andre said.

“We were flying in November and at the moment it’s very, very tough.”