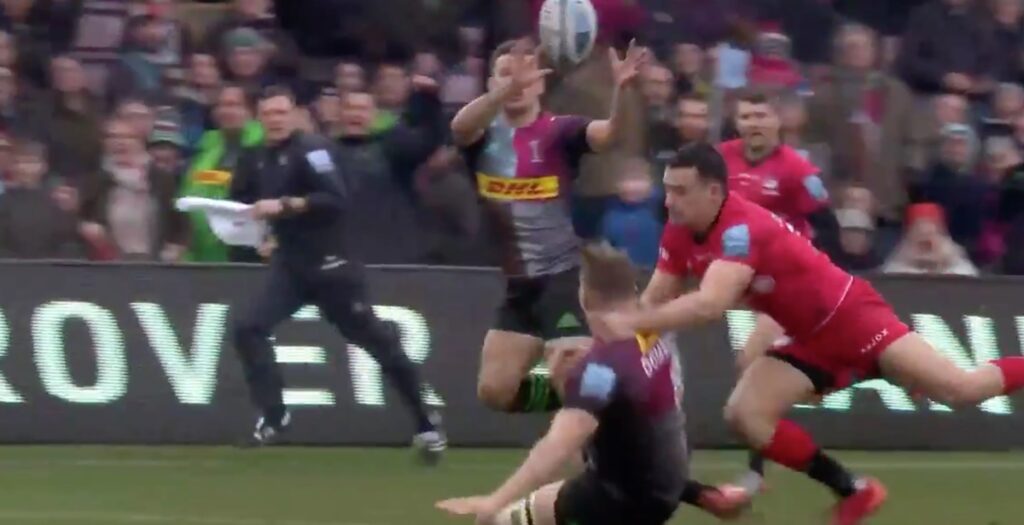 The 22-year-old received the ball from the back of a line out on the halfway line and released Danny Care on his inside. The scrum half then gave the ball back to Dombrandt, who managed to return the favour to Care with a wonderful offload.

The former England scrum half finished off the try in just the second minute of the game to help Quins seal a 41-14 win against the reigning champions.

Dombrandt was recently left out of England’s Six Nations squad and fans are now calling for the youngster to be called up for international rugby.

GET ALEX DOMBRANDT IN THE ENGLAND SQUAD EDDIE!!

78 seconds in and the heavy duty No.8 wins a turnover before flinging an audacious backhander to Danny Care 🤯

We are in for a game this afternoon – #PremRugby pic.twitter.com/U51SNq3nE1

“Alex Dombrandt shouldn’t be in the England squad” ….said only one person ever….

As a @Saracens fan, all I can say is well played @Harlequins you dominated the game today. It also baffles me how @Alex_dombrandt isn’t getting call up to the @EnglandRugby squad is beyond me, clearly the best number 8 in England at the money

The day it all seemed to catch up with Saracens. Big numbers…and all of them Quins numbers. How good were Marcus Smith & Alex Dombrandt? Suspect the latter will be involved in the Six Nations soon enough @btsportrugby pic.twitter.com/yLZ4d5fiFe

What more do Alex Dombrandt & Marcus Smith have to do to get in Eddie Jones England squad?#HARvSAR

No Sam Simmonds or Alex Dombrandt in the @EnglandRugby squad for the @SixNationsRugby, have I been watching different games to Eddie Jones?!

My goodness. I was wrong, he is ready.