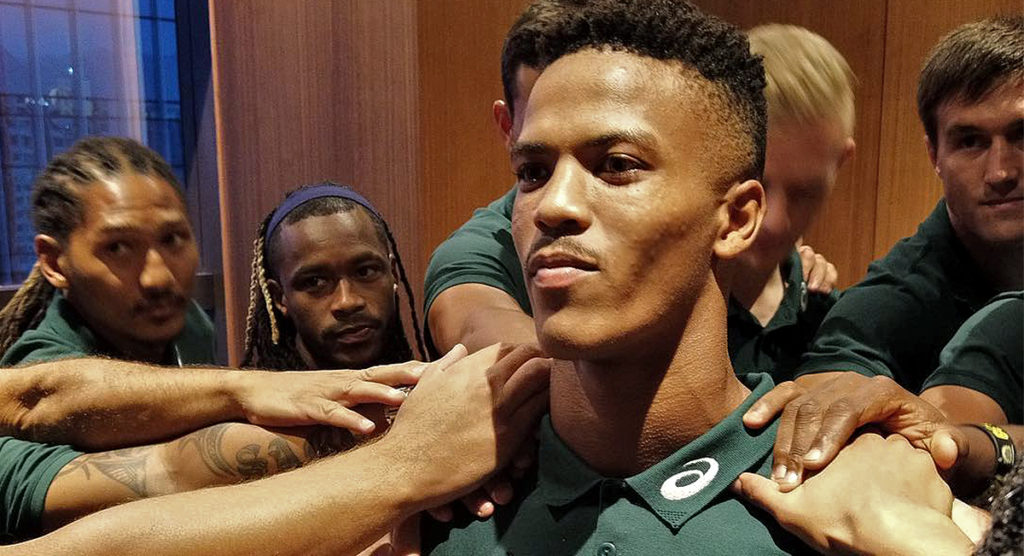 Reigning World Rugby Sevens Series champions South Africa go into the Hong Kong Sevens this weekend rejuvenated, after winning their first tournament of the season in the last round in Vancouver.

Heading into the tournament, the Blitzboks are awarding a first cap to 19-year-old Angelo Davids. However, they have displayed quite a unique way of initiating him into the team, which they shared today.

As head coach Neil Powell awarded the player his jersey, his teammates all placed a hand on his back, to show that they have his back when they are playing.

Powell speaks in Afrikaans but you can read the quite touching translations on the video.

“You are more than good enough to be here. You have more than enough talent to do your thing out there. The guys who are touching you now are the guys who will be backing you this weekend and who will help you every time you need them,” Powell said.

Sevens is a sport where a lot of confidence has to be placed in teammates, perhaps more than the 15s format of the game. This is a symbolic representation of the trust that players must have for one another, shown in quite a different way.

Davids was earlier this week awarded his first training jersey in another show of camaraderie, as senior player Chris Dry stressed the importance of his achievement.

It takes a minute but the memory lasts forever. It says “Welcome to the family, you are now part of the brotherhood”. Angelo Davids received his training jersey on Monday as the team stepped up preparations for @cathaypacific @OfficialHK7s @CastleFreeSA @FNBSA @ASICS_ZA pic.twitter.com/KThdZjJJrC

With the tournament starting tomorrow, the Blitzboks have a mountain to climb if they are to retain their World Series crown from series leaders the USA, and a good finish this weekend is a necessity.