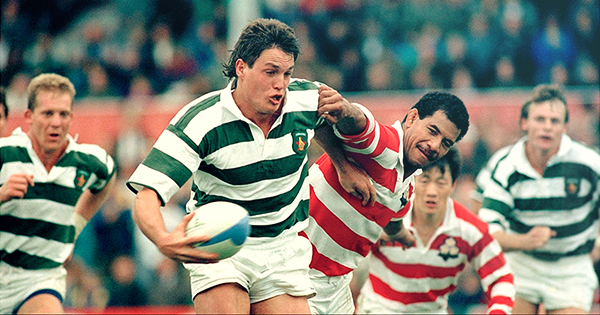 As a nation, Zimbabwe received a huge boost this week with the news that their former oppressive leader will rule no longer. With that comes a huge amount of optimism, and the hope that they can get another shot at making an impact on the rugby field.

Zimbabwe, formerly known as Rhodesia, has a proud rugby heritage and played in the first two Rugby World Cups in 1987 and 1991. They came very close to making it to the 2015 edition, but are out of the running for the 2019 Rugby World Cup in Japan.

They have produced a number of top quality players over many years though, many of which have felt compelled to move to neighbours South Africa.

The economy and lack of funding has meant that staying in Zimbabwe to be a professional rugby player was simply not possible, so the move across the border has been a natural step for many.

THE BEAST AND THE FLYER

This weekend the Springboks’ most capped prop, Tendai ‘Beast’ Mtwarira, will play his 98th Test. He hails from Zimbabwe but moved, like Tonderai Chavhanga, Brian Mujati and many others.

“Because of professionalism and the money coming into the game now, these youngsters coming out of Zim.. of course they are going to look to greener pastures to better themselves financially,” says former Zimbabwean and Springbok winger, Ray Mordt.

“If you see a young man who is good at the game obviously you are going to tell them that they gotta make their bucks whilst the sun still shines, because rugby is not a long career; it’s a short time.”

Speedster Chavhanga, who famously scored six tries on Springbok debut, is an example of that.

“As much as I would have loved to play for Zimbabwe, I knew from a pretty young age that I wanted to play professional rugby. The only way for that to happen was for me to come to South Africa,” he said.

It’s an unfortunate reality, but the hope is that in time things will turn around again. The country still produces has a strong schools system, but they are currently considered ‘Third Tier’, with a ranking of 46th in the world.

The oldest clubs in the country were formed in 1894, with the Rhodesia Rugby Football Union founded a year later in 1895. It was later renamed to Zimbabwe Rugby Union in 1980, when the country changed names as well.

The touring British Lions teams used to play against them, first in 1938. Then, a famous victory.

In 1949 the Rhodesia team famously beat the touring All Blacks side 10-8 in Bulawayo. Three days later they played them again, that time drawing 3-3.

Zimbabwean Kennedy Tsimba, the highly skilled former Cheetahs flyhalf who many felt should have got a Springbok cap, says that there is still plenty of talent in the beautiful country.

The great David Pocock, of course, is Zimbabwean and only moved to Australia with his family as a teenager, and former Force teammate Kyle Godwin has a similar story. England back Brad Barritt’s father and grandfather both played for Rhodesia.

Then there is the man who scored one of the most famous Rugby World Cup tries of all, Takudzwa Ngwenya, who only moved to the USA after completing high school in Zimbabwe. Not to mention former Springbok captains Bob Skinstad and Gary Teichman, who both originally hail from Zimbabwe.

As this great tribute video shows, Zimbabwe has had it’s fair share of rugby talent over the years and we can only hope that this week’s news is a positive step that will lead to more funding for sports programmes, so that rugby continues it’s rich heritage in the country.