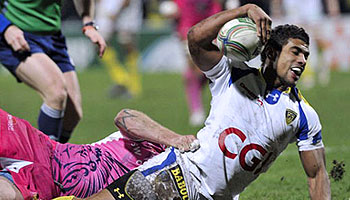 Clermont produced some dazzling rugby as they thumped Exeter Chiefs 46-3 at the weekend, qualifying for the Heineken Cup quarter finals in the process. One of the tries of the game, a real team effort, was finished excellently by centre Wesley Fofana.

The home team scored four tries in the last 20 minutes to blast away their Devon based challengers, knocking them out of the competition. Exeter will aim to give Leinster a hard time this weekend at Sandy Park, but Captain Tommy Hayes says this standard of play is something new.

“It is the same as when we got up into the top flight from the Championship. We knew we had to kick on, in terms of what we do as forwards and backs, how we work together, our kicking game, and in every element of the game,” he explained.

“We have come up against a team who are probably favourites to win the competition, and they have just exposed us to a higher level right across the board.”

Four teams have already qualified for the quarter finals, with Clermont, Harlequins, and Toulon the only sides to have won five from five matches. Ulster have also qualified, as they topped Pool 4.

Clermont flyhalf David Skrela is now on a tournament total of 494 points, just six points away from receiving a prestigious ERC Elite Award. He came on and scored a converted try.

Fofana’s try however was one of the best of the season, as he got on the end of a sweeping move that finished with a neat inside flick from centre partner Regan King.