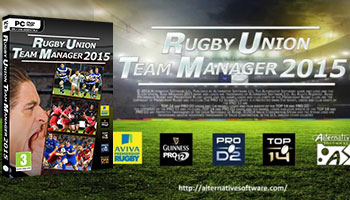 We’re giving away 5 copies of the brand new Rugby Union Team Manager 2015, the most comprehensive rugby management game ever created. Learn more about it below, watch the video and enter now to stand a chance of winning.

Fans have been asking about a quality Rugby Union manager game for years, so with Alternative Software’s latest release, rugby gurus now get the chance to immerse themselves in the dynamic world of Rugby management, allowing the player to battle their way through season after season; securing success both on and off the field.

Pleasing the fans and the star players whilst maintaining the backing of the boardroom, you will be in complete control. Rugby Union Team Manager 2015 delivers the most comprehensive rugby simulation ever produced, with the biggest licensed competitions from across the world, over 14,500 players and over 320 playable teams.

Always keeping you in complete control, Rugby Union Team Manager 2015, not only puts you in charge of the team, but an entire club, from youth development through to the first team, the players, coaches, physios, scouts and doctors – you’re in charge.

The game has been in development for the past 2 years, and has been developed, from the ground up by Rugby fans for Rugby fans.

The release date is December 3rd, while the French version will be released around the 16th December. It will be available via several retailers, including as a digital download via Steam.

ENTER TO WIN ONE OF FIVE COPIES:

How many officially licensed teams are there in Rugby Union Team Manager 2015?
Send an email to competitions@alternativesoftware.com with the answer

The closing date for entries is midnight, Sunday 14th December 2014. Winners will be contacted via email