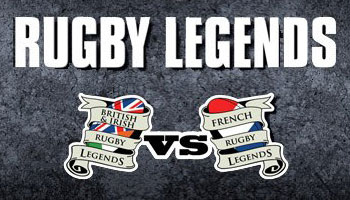 The inaugural British & Irish v French Rugby Legends game takes place at The Stoop on Friday February 22nd. It’s the night before France take on England at Twickenham in the Six Nations, and we have pairs of tickets to give away for it.

Serge Betsen, with his 63 International caps for France, will lead out a formidable line-up of recent top-class former International players, including Christian Califano, Franck Comba, Christian Labit and Gregory Tutard.

Title sponsor Just Retirement will present a trophy to the victorious team in this historic match.

To enter answer the following question:
What is your favourite memory of one of the legends taking part? [full squads below]