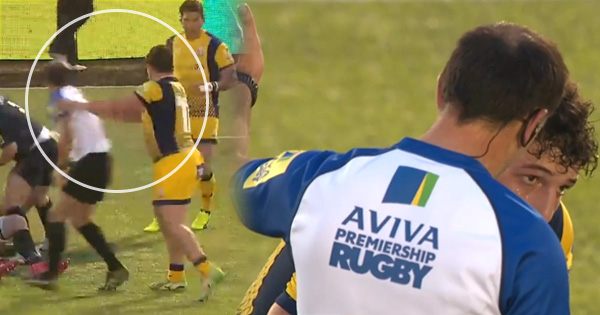 Worcester Warriors prop Val Rapava Ruskin will appear before a RFU Discplinary panel tomorrow following this push he made on referee Greg Garner during the Aviva Premiership match against Newcastle Falcons at the weekend.

*NOTE: See update at the bottom that details his 6 week suspension

Rapava Ruskin, who is of Georgian descent but has been touted to be a future England frontrow powerhouse, has been charged with allegedly committing acts contrary to good sportsmanship, under Law 10.4(m).

The prop pushed match official Greg Garner in the back with both hands as they both approached the breakdown. Garner called him aside and firmly reprimanded him, but apart from the penalty, took no further action.

“Put your hands on me like that again.. push me out the way, and I will send you off the pitch.”

Rapava Ruskin was subsequently cited following the match and will therefore appear before a three-person RFU Disciplinary panel chaired by Daniel White in Bristol on Wednesday 3 May at 6:30pm.

Ruskin is heading to Gloucester for next season, but could be out of action for a number of weeks following this incident, which means he will miss his farewell home match against Leicester Tigers.

He is on standby for England’s two-match series against Argentina in the summer, but that could also be in jeopardy if he gets handed a lengthy suspension.

UPDATE: Rapava Ruskin pleaded guilty and has been suspended for 6 weeks

“The panel heard from the player and after carefully considering all of the available evidence, found that this was at the lower end of seriousness for this type of offending. The panel imposed a sanction of six weeks which reflects the seriousness of making contact with a referee or any match official.“