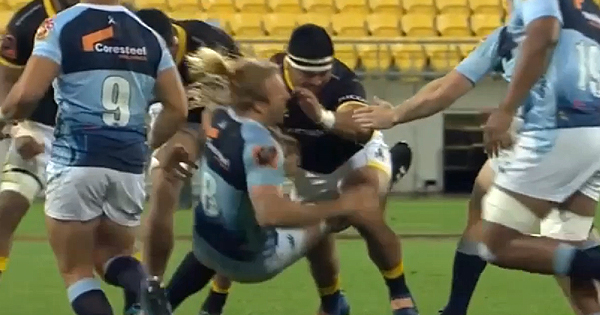 Dynamic Asafo Aumua played a significant part in swinging momentum the way of Wellington in a second half that saw him scoring twice in a 36-18 win over Northland earlier today. And it all started with this punishing double tackle by himself and new All Black, Vaea Fifita.

Fifita made a huge name for himself the world over recently when he put in a stunning performance against Argentina on his first ever start for his country.

He made a few bruising hits in this Mitre 10 Cup game, but it was Aumua who did most of the damage when Northland flanker Matt Matich caught a restart kick and charged up field.

The two bruisers put all their weight into haulting him dead in his tracks, making him think twice the next time he looked up and saw Aumua in front of him in a similar position.

After coming off the bench in the 45th minute, Aumua couldn’t stay out of the action, as he crossed for two tries and set up another, continuing this white-hot streak of form and again sparking up talks of him being on the end of year tour for the All Blacks.

Also on the scoresheet were discarded All Black Julian Savea and Thomas Umaga-Jensen, the nephew of Test and Wellington legend, Tana.

The win was the Lions’ ninth win in ten matches, with 10 bonus points in the process.