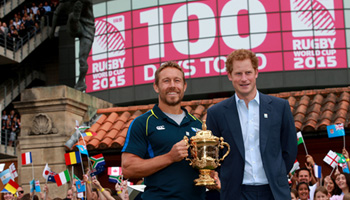 With 100 days to go until the Rugby World Cup, Prince Harry was on hand at Twickenham, along with winners Jonny Wilkinson and Will Greenwood, to launch the Rugby World Cup Trophy Tour. More info below, and in the video you can hear from Greenwood and RFU Chief Executive, Ian Ritchie, on host country England’s chances.

They were joined by local schoolchildren from Richmond and Hounslow to send the Webb Ellis Cup off on its 100 day journey around the UK and Ireland. The Rugby World Cup Trophy Tour will visit over 300 events including Rugby clubs, sporting events, schools, community festivals and iconic landmarks.

The Trophy Tour will celebrate Rugby and the hosting of Rugby World Cup 2015, providing as many people as possible with the chance to engage with the Tournament and see Rugby’s greatest prize.

Speaking at Twickenham Stadium, Prince Harry said: “This is a very exciting day – just 100 days until the start of Rugby World Cup 2015. I am pleased to send the Webb Ellis Cup on the Rugby World Cup Trophy Tour which will enable rugby fans from across the country to play their part in the build up to the Tournament.

“Rugby is a game built on values – respect, pride, teamwork and discipline. In 100 days’ time, England and Cardiff will play host to an incredible festival of rugby with the world’s best players, the world’s best teams and of course the world’s greatest fans demonstrating these values.

“As we have shown with the Olympic, Commonwealth and Invictus Games, we are a nation of great hosts; a nation that seizes the moment. The world will be expecting us to deliver and I know we won’t disappoint.

“With 48 matches spread across the country, I hope that every community can be part of this Tournament and celebrate the Game of rugby.”

Hear from Ian Ritchie and Will Greenwood below, discussing England’s disrupted build up so far