A look back at the career of Nicky Robinson, including THAT penalty shootout and some brutal hits 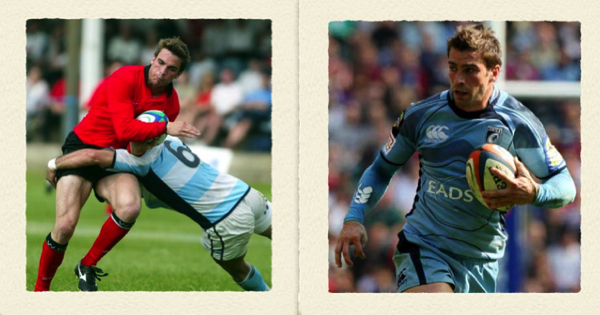 Nicky Robinson announced his retirement from rugby on Tuesday, bringing the curtain down on a 15-year career. We’re going to take a look back, including a trip down memory lane to the memorable Heineken Cup Semi-Final shootout between Cardiff Blues and Leicester in 2009, and a look at some of the big tackles Robinson has endured down the years.

After a distinguished career including playing spells in Wales, England and France, as well as 13 caps for Wales, Nicky Robinson has announced his retirement from rugby.

I’d like to announce my retirement from rugby.The time is right for a new chapter in my life.I’ve loved the last 15 years-thank you rugby ????

Schooled at the Welsh-speaking Ysgol Glantaf a few years ahead of Jamie Roberts and Rhys Patchell, he made his debut for Cardiff RFC in 2001 before the advent of regional rugby, two years after his elder brother, Jamie, had begun his career with the same side.

He instantly made an impression as an exciting, running fly-half, as if moulded in Max Boyce’s mythical fly-half factory itself, while he also possessed a cultured left boot.

He continued to ply his trade in the Welsh capital with the newly formed Cardiff Blues, and after inspiring Wales U21 to a Grand Slam in 2003, he was rewarded with an international debut in a World Cup warm-up game against Ireland.

Despite continuing to impress for his region, Robinson wasn’t quite able to replicate his form for Wales, although he was often a victim of circumstance.

His late drop-goal to seal an 11-10 victory over Fiji in 2005 may have been a match-winner, but it wasn’t enough to mask a desperately poor performance from the team as a whole, and so he consistently found himself behind the likes of Stephen Jones, James Hook, Ceri Sweeney and Gavin Henson in the fly-half pecking order.

There’s only one real highlight from that Fiji game but it is definitely worth revisiting, and that is Fiji second-row Ifireimi Rawaqa’s sensational 60-yard breakaway score. What the below video lacks in quality, the try more than makes up for.

The 2008/09 season proved to be Robinson’s annus mirabilis, marshalling an exciting Cardiff Blues side to Anglo-Welsh success, and to that famous Semi-Final defeat against Leicester. The Blues won the EDF Energy Cup having been undefeated throughout the group stage, culminating in a 50-12 hammering of Gloucester in the final at Twickenham.

In Europe, the Blues proved equally tough to beat. Robinson guided his team to home and away victories over Biarritz and Gloucester (including at The Shed with only 14 men after a Tom James headbutt on Olivier Azam in the first-half) before a record Welsh crowd for the tournament of 36,728 watched a 9-6 victory over the 2007/08 runners-up Toulouse.

The Semi-Final against Leicester has entered the game’s annals for the penalty shootout that ensued. Our full write-up on the game can be found here.

After Robinson’s outstanding season, there was much talk in the media not just of a call-up to the Wales side, but he was even mooted as an outside shot for the Lions squad to tour South Africa that summer. As it was, Robinson was selected for the Wales tour to North America, where he shared the fly-half duties with a young Dan Biggar.

Growing disillusioned with the dearth of opportunities with Wales – and perhaps disheartened by Cardiff’s disastrous decision to sign Sam Norton-Knight as a fly-half – Robinson decided to leave his homeland and sign for Gloucester for the 2009/10 season.

The West Country giants obviously liked what they saw when Robinson’s Blues side beat Gloucester on all three occasions they had played in the previous season.

Testament to Nicky Robinson’s career, is that many at Cardiff/ Cardiff Blues still don’t think he’s been adequately replaced

Robinson spent two years with Gloucester, taking them to consecutive Anglo-Welsh Cup Finals and a Premiership Semi-Final, before teaming up with his former Cardiff boss, Dai Young, at Wasps.

He played for four further seasons in England, spending two years with Young before a two-year spell at Bristol.

Like all fly-halves, Robinson showed throughout the years that he was able to live with the big (and sometimes illegal) hits that often come the playmaker’s way.

Despite proving a hit in England, Robinson sought a new challenge and signed for Oyonnax on a three-year deal for the 2015/16 season. Unfortunately, the move didn’t quite pan out as he had planned, and with Oyonnax suffering relegation and with a new coach at the helm, Robinson has decided that now is the right time to hang up his boots at the age of 34.

Tributes have poured in across social media from former teammates and pundits, as testament to how highly rated Robinson was.

Just heard the news that Nicky Robinson has decided to retire. In his day one of the best attacking outside halves around, I wish him well

Best wishes to @nickyrobo on retirement. A lovely footballer, and on his day as good as any OH in Europe. Also a gentleman like his bro.

Sad to know we will never see @nickyrobo death stare ever again! One of the most skilful players I know + such a nice guy! Enjoy retirement

Congrats a great career @nickyrobo and thanks for the words of wisdom back in the good old days! ???????? pic.twitter.com/CYrTGRV370

Nicky Robinson was undoubtedly a better player than his 13 caps for Wales suggests, as supporters of Cardiff, Gloucester, Wasps and Bristol will testify.

He was never trusted with the keys to number 10 by the Welsh management, but proved a hit at every club he represented. We wish him all the best for the future.