All Blacks remain unbeaten with strong win over Boks in Soweto 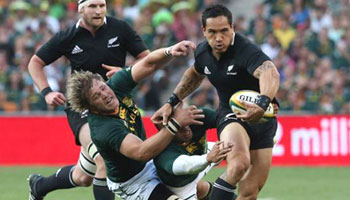 New Zealand finished the inaugural Rugby Championship with six wins out of six games as they put on a strong second half performance to crush the Springboks 32-16 in Soweto on Saturday. The home side had led 16-12 at halftime.

Soccer City (also know as the FNB Stadium or National Stadium) had over 80 000 fans on hand to witness Richie McCaw’s 100th Test match win, which he has achieved in 112 Tests.

Bryan Habana continued his try-scoring form but it was the Springboks’ only try, as the visitors ended with four in total, scored by Sam Whitelock, Aaron Smith, Ma’a Nonu, and Conrad Smith.

The Springboks got the better of the collision game in the first half but when things got a bit loose, the All Blacks tore them apart with some typically clinical play, including 11 points from the boot of Dan Carter. The visitors effectively won the second half 20-0.

“At 16-12 we were in the game. They were forced to play from deep and we managed to put them under huge pressure,” said Bok coach Heyneke Meyer.

“Just after half-time they scored from a turn-over, then Carter took over. They were superb to close out the game and we need to learn from that. They used their opportunities, we did not.”

All Black captain McCaw, who was showing the bruises of battle after the game, said that his 100th Test win was hugely satisfying. “These test matches are brutal and you have to be on your game, and I was proud of the boys tonight.”

Coach Meyer has praised McCaw, saying that he’s never seen him play a bad game, and that his son is actually in awe of the great All Black skipper.

“My kid is a big Richie McCaw fan. After the match (at Loftus in 2006) he gave his boots to my son. That’s the type of thing the public doesn’t always see.”