All Blacks too strong for Springboks in Cape Town 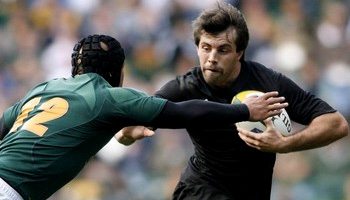 The All Blacks kept South Africa scoreless for only the fourth time in 75 meetings by beating them 19-0 in Cape Towns Tri Nations test on Saturday. They were led brilliantly by powerhouse flanker Richie McCaw, who stood out as a true leader and one of the players of the match with his overall performance.

New Zealand weathered the Springboks strong start, and nullified the home ground advantage by soaking up the pressure and keeping themselves ahead after an early try by Conrad Smith. McCaws deft kick ahead was yet another mark of the mans class, as Smith dived over and somehow managed to dot down.

Flyhalf Dan Carter miraculously missed five of seven attempted kicks at goal, possibly never seen before by Carter at this level. It didnt matter though, as the men in green failed to take advantage of that and use their chances to put points on the board.

The All Blacks defence was heroic, once again led by McCaw, who was seen putting in numerous hard tackles and winning turnover ball on the ground, showing precisely how slow the Springboks were at the breakdown.

The game sat at 5-0 for the whole of the first half, as Carter continued to let South Africa off the hook by skewing kicks in a rare display of poor goal kicking. The rest of his play was up to normal standard though, with his moment of brilliance with 14 minutes left in the match putting the visitors well ahead.

The grounding of the ball from Carter, after the neat little jink, showed what a superb player he can be with ball in hand.

With five minutes left, Francois Steyn and Jean De Villiers combined to hand All Black hooker Kevin Mealamu an absolute gift, as the pressure to create something out of nothing resulted in them tossing Mealamu the ball, for one of the easier tries hell score in his career.

Percy Montgomerys 100th Test match for his country was meant to be an occasion to celebrate for the home side, but looking leaderless and frustrated, the errors and subsequent failure to get on the board cost them.

The All Blacks composure and determined defence on the other hand, was probably the difference between the two sides in the end. That, and king Richie, who has once again shown what an incredibly classy player and captain he truly is.

The All Black now sit at the top of the table with 14 points, while the Springboks remain in last place with five.

Is ten minutes too long for highlights? Spot on, or bandwidth killer? Let us know please.