All Blacks win the Rugby Championship with Argentina thumping 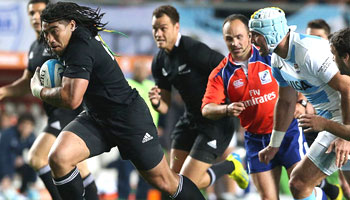 The All Blacks secured the Rugby Championship title with a 54-15 rout of Argentina in Buenos Aires on Saturday. The hosts scored first, but it was one way traffic after that as the World Champions silenced the crowd with some clinical finishing.

Few expected such an emphatic result but once the All Blacks kicked into gear they couldn’t be contained as gaps opened up and they exploited the overlaps with some slick handling.

The visitors seemed to be shaken into action after Argentina had scored a lovely try early on. What followed was a hiding the likes of which we haven’t seen this year, as for the first time in the inaugral tournament, Argentina looked off the pace.

“We were a bit jittery in the first five, ten minutes,” coach Steve Hansen said. “Once we controlled our composure we came straight back into the game and took control of it.”

Cory Jane picked up a hat-trick of tries while Julian Savea crossed twice, and Ma’a Nonu and Aaron Smith scored a try each. New Zealand now lead the tournament with 21 points after their five straight victories. They meet the Springboks in Soweto next weekend, but the deficit is such that they cannot be beaten, so were awarded the Rugby Championship trophy in Buenos Aires.

“I don’t think too many teams have gone unbeaten previously. If we could win the inaugural championship and do that next week it would be a massive effort from us,” said Kieran Read.

The All Blacks have now win 15 consecutive Tests and need just four more wins to break the current world record, held by Lithuania. The Springboks will be aiming to do the record holders a favour by preventing that in front of a massive crowd in Soweto next weekend.

“Playing South Africa in South Africa is obviously tough, especially when they’re coming off a big win. They’ll be confident. They’ve made some changes to their team, and as a result of that they’ve changed the way they play slightly which has improved them,” said Hansen.