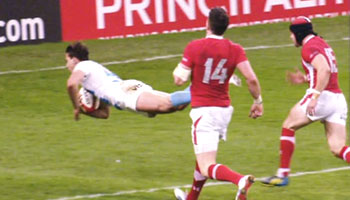 Argentina claimed a well deserved first victory in Cardiff for eleven years as they beat Wales 26-12 on Saturday. It gets worse for the hosts as it’s been confirmed that they’ve lost more players to injury ahead of their meeting with Samoa.

Argentina, fresh from the Rugby Championship which saw them compete with the best of the southern hemisphere, showed how match-fit they were as they shut out the Six Nations champions.

“Their experience and their exposure to the Rugby Championship have taken them to another level,” said Wales interim coach Rob Howley. “You have to play against the best to learn, and they’ve certainly learned from it.”

Argentina’s inspirational captain Juan Martin Fernandez Lobbe said after the game that as a group, they were searching for the win for a long time.

“We are so happy to be able to win against such a good team, the Six Nations champions.. It’s huge to get this win for this group, in this stadium, the best stadium in the world,” he added.

An impressive game from flyhalf Nicolas Sanchez and excellent tries from Juan Imoff and Gonzalo Camacho proved the difference between the two sides, on a day that Wales would rather forget.

“Modern day rugby, you’ve just got to forget that loss now and concentrate on Samoa,” said wing Alex Cuthbert, referring to their challenge with Samoa, who themselves beat Canada on Friday.

“It was quite a weird game really, obviously it is no excuse (but) Jamie Roberts going off quite early, maybe disrupted our back-line, and Alun-Wyn going off as well, left us without an option at the line-out and we had to go front ball a lot of the time which is hard.

“But no excuses because we have got quality players coming off the bench, it just seemed one of those days where it didn’t go right for us,” he added.

Today it was confirmed that lock Alun-Wyn Jones, who went off with a shoulder injury, will be out for the rest of the autumn series, as will loose forward Josh Turnbell, who damaged knee ligaments.

Jamie Roberts, who took a big knock against Argentina, is continuing to be assesed for mild concussion and may be availale to face Samoa.

Wales face New Zealand and Australia after that this weekend’s game against Samoa. Argentina travel to France next, then they face Ireland in Dublin on the 24th November.