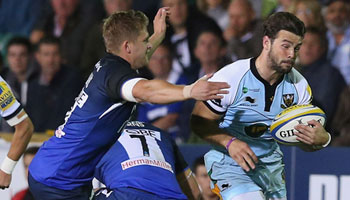 Round three served up one upset in particular, a draw, and some lovely tries. Today we’ve got a wrap-up of all the games in one video, and we’ve also archived highlights of each individual game, all in one place for you to browse through at your leisure.

Saracens vs Leicester Tigers was expected to be the biggest match of the round, but Wembley instead hosted a 9-9 draw, which ended with dramatic late missed dropgoal attempts that would have proved the difference between the two sides.

Harlequins secured their placing at the top of the table with a comfortable 37-14 win over Sale Sharks at The Stoop. Nick Evans scored 17 points as Quins picked up their third successive bonus point win of the season.

Wasps were as convincing as ever with a 43-14 win over London Irish as Tom Varndell scored twice, and new signing Stephen Jones kicked four conversions and five penalties.

Northampton Saints remain unbeaten as they beat Bath 18-14, with Steven Myler kicking five penalties and replacement Tom May coming on to kick a late dropgoal to seal the win.

The upset of the round came as new boys London Welsh beat Exeter Chiefs 25-24 on Sunday. It was their first win in the Premiership, and came late in the game as Ed Jackson drove over the line, before Seb Jewell converted the try.

Below is the weekend wrap-up. View longer highlights from each and every game here.