Aviva Premiership Tries of the Week + Round 17 Highlights Wrap 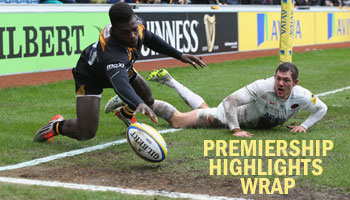 There were some stunning tries scored in Round 17 of the Aviva Premiership in England. Christian Wade dazzled, Eliot Daly was like a slalom skier and Sinoti Sinoti barrelled his way over. Above are five of the best, with a full highlights wrap from all games on page two (or below).

Which is your favourite try of the round?

This battle at the Ricoh Arena saw a number of contenders for try of the season being scored. Saracens recovered strongly after falling to an early 14-point deficit to win. A victory, which sees them rise to 3rd in the table and inflict the first defeat for Wasps at the Ricoh Arena.

Wasps were very impressive in the first half and thoroughly deserved their 17-3 lead through two outstanding tries from Christian Wade and Elliot Daly. Christian Wade’s combination of electric pace and sublime football skills saw him score a superb try in the corner from the halfway line.

The try being correctly awarded even though his feet were in fact in touch as he was not in possession at the time. Saracens clawed their way back into the game however through tries from Chris Wyles and Jackson Wray.

Whilst Saracens will be pleased with the victory there is concern for Brad Barritt, as the England centre hobbled off in the second half. It’s an injury that will also concern England when it comes to selection for their game against Scotland on the weekend.

Leicester arrived at Kingston Park with a point to prove with a lot of critics writing off their chances of Premiership success this season. A late try was enough to see them through against a tough battling Newcastle side.

The moment of the match fell in the 75th minute where a high ball was hoisted into the corner. The ball, contested by two brothers, Alex Tait of Newcastle and Matthew Tait of Leicester, fell to Leicester where a touch from Alex pushed the ball over the line in which Leicester’s replacement winger Tommy Bell touched down.

The win sees Leicester move up to 5th in the table just behind Bath on point’s difference. Their victory however, like Saracens, is marred by an injury scare to flanker Tom Croft, who was taken to hospital with a suspected dislocated shoulder.

London Welsh’s chances of winning a game this season never seemed as likely as they did in the first quarter of the game. Sandy Park was stunned as Welsh in fact led 12-6, however that was as good as it got for the Premiership basement club.

Exeter scored 4 tries between the 23rd and 39th minutes as they put London Welsh to the sword. Exeter were also awarded two penalty tries as the exiles set piece fell to pieces.

For Welsh, this game is their 27th loss in a row for a club that signed 26 new players upon promotion last summer. Only three players from their Championship season remain at the club.

Exeter are now up to 2nd in the table and should they keep playing the way they are, look a shoe-in for the playoffs this season.

The game itself was tight and one that could only be decided by the boot. For Sale, they welcomed back fly-half Danny Cipriani from England duty, however he couldn’t break the resolute Bath defence.

On the other hand this game is the second in a row in which Bath haven’t managed to score a try, and perhaps on another day the wayward kicking of Homer (missing three of his seven kicks from the tee) could have cost the west-country side.

Bath had 73% possession in the first half yet only had the boot of Homer to show for it.

In what was a boring game to watch for the neutral, one comedic moment stands out, and it comes from the Sale superstar Cipriani himself. The England fly-half hooking a penalty and finding himself landing on his backside!

Harlequins managed to hold on despite a late Irish comeback win to end their five game losing streak.

Two tries from Matt Hopper and Danny Care were enough to see the Twickenham side through despite Tom Fowlie’s late score for Irish. The late try giving London Irish a much-needed losing bonus point and one they at least deserved.

James Short’s try for London Irish coming after Harlequins fullback Ross Chisholm forgot the famous schoolboy mantra ‘never let the ball bounce’, and collected the bouncing ball to score under the posts. The result sees Harlequins move up to 8th, 9 points adrift of fourth spot, whilst Irish find themselves in 10th place.

Gloucester hearts were broken by a late score from Samu Manoa that salvaged a draw for the Premiership leaders. The result means that Gloucester are in fact undefeated at Kingsholm in 2015, winning their last 5 games at the stadium.

The game was a fantastic showcase of running rugby and the victory sees Northampton’s Premiership lead being cut to 9 points, whilst Gloucester slip to 9th place.

For Gloucester fans, six minutes from time they must have thought they had stolen the victory when substitute Henry Purdy crossed the line out wide, however the try was disallowed for an infringement earlier in the build-up.