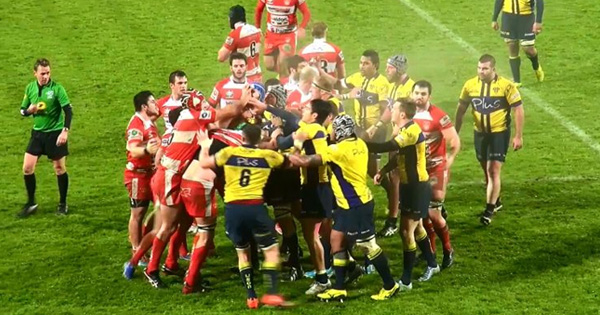 On Saturday night in France this brawl kicked off following a really bad looking tip, or spear, tackle in France’s Federale 1 division, the third division of rugby in the country. The game was between Nevers and Lombez-Samatan and the fight actually resulted in only two red cards.

As reported and shown by lejdc.fr, the first transgression is the spear tackle by Lombez-Samatan, which leads to a bit of push and shove. It goes on for a while, but eventually spills over into a full on brawl, with pods forming and a few players ending up on the wrong end of mass uppercuts.

When it all died down, the referee chose to send off just two players, with Nevers’ Samoan back Fa’atoina Autagavaia being one of them, and the other being Hugues Bastide.

When watching the video back, we’re sure the officials will agree that a number of players could have seen red. Unfortunately then the forward packs would have been down to about three a-side.