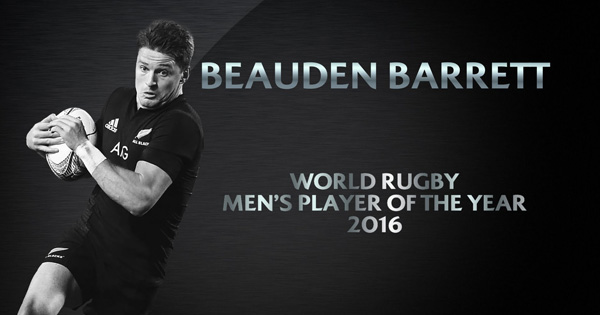 Beauden Barrett has been named World Rugby Men’s Player of the Year for 2016, becoming the fifth All Black in succession to win the prestigious award. The 25-year-old flyhalf has put in consistent world class performances this year playing for both the Hurricanes and the All Blacks.

The shortlist of nominees consisted of players that had a great year playing for their countries, namely Maro Itoje, Dane Coles, Jamie Heaslip, Owen Farrell and Billy Vunipola.

All Black fans were debating who their best starting number 10 would be after Dan Carter retired from Test rugby, but Barrett’s exceptional performances led to him leaping ahead of the likes of Aaron Cruden and Lima Sopoaga, resulting in a highly successful period for New Zealand rugby and no post-Carter hangover.

“It means so much, it’s certainly something I don’t expect to be awarded… even to have my name thrown in the mix with the talented players we saw nominated.” Barrett commented after receiving his award.

“It’s a by-product of a couple of great teams I have been a part of this year, the Hurricanes and the All Blacks. I have to thank the coaches and my team-mates around me because without them I wouldn’t be here.”