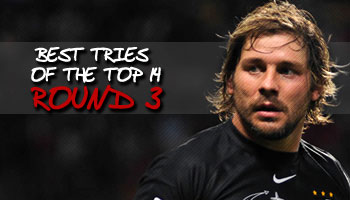 proved to be a positive, as clubs such as Toulon were very much in the headlines, attracted huge media presence from all over the world.

The action so far has been entertaining, with not only some

, but also a few spectacular

that have caused a stir but made me interesting viewing.

We’re now heading into Round 5 of the tournament, and this weekend sees a few more big clashes on the cards. League leaders Stade Francais will face off against Brive, while second and third play each other, as Perpignan and Montpellier meet on Saturday night. That’s just two of the big games in prospect coming up.

This video highlights a few of the better tries from Round 3, giving you a nice broad view of some of the teams and players that compete in one of the more fascinating leagues in world rugby. We’ll feature more Top 14 tries in the weeks to come, so stay tuned.