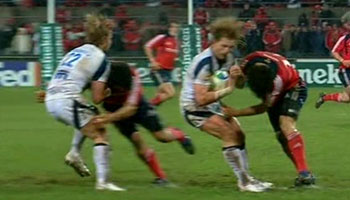 A packed Thomond Park witnessed a convincing win by Munster over the Sale Sharks by 37-14, ensuring them qualification for the knock out stages of the Heineken Cup.

Looking as impressive as ever, the six try victory shows that theyre once again going to be a difficult prospect to topple. Theyve now reached the knock out stages for the 11th successive season.

Howlett has made a number of impressive big hits in recent times, showing that as a wing, whether youre big or small, youre not just about finishing tries. Offensive defence can lead to tries as much as creative play can.

The ball was turned over shortly afterwards, and a few quick passes put Paul Warwick away in space to run in their sixth try.