Brian O'Driscoll dropped for series decider against the Wallabies 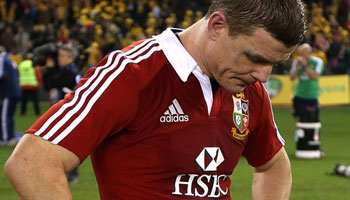 Warren Gatland has made six changes to the side that faced the Wallabies last weekend, shocking fans by dropping Brian O’Driscoll, who had been widely tipped to captain the team in his last ever British & Irish Lions game.

With the omission of captain Sam Warburton through injury, O’Driscoll appeared to be the front runner to take over on his fourth Lions tour. Instead, a midfield change has meant he’s not even on the bench, and Alun Wyn Jones will skipper the side.

“Picking this team was not easy and ultimately with several players available after recovering from injury the head overruled the heart in many selection decisions,” said coach Gatland.

There are a record equalling 10 Welshmen in the team, the first time since 1950.

“It has been a challenging tour and we have had our fair share of injuries but we always knew that would be the case. Brian O’Driscoll is a great player and has had a wonderful career but for the final Test in Sydney we just felt Jamie Roberts’ presence offered us something more.”

It’s a decision that has dismayed fans as the deciding Test was set up perfectly – should the Lions win it – for a famous send off for one of the greatest rugby players of his generation.

O’Driscoll was reportedly told before the team was announced, which he appreciated.

Elsewhere, Mike Phillips returns to start instead of Ben Youngs, and Sean O’Brien gets a start, along with Toby Faletau. Alex Corbisiero also returns from injury, and Richard Hibbard will start at hooker.

“Mike Phillips and Alex Corbisiero were 1st Test selections and would probably have played in the 2nd Test if not for injury. Richard Hibbard, Toby Faletau and Sean O’Brien have also earned their starting places.

“It all comes down to Saturday. Winner takes all. We know we can leave nothing in the tank and that only a complete performance will get us across the line,” said Gatland.