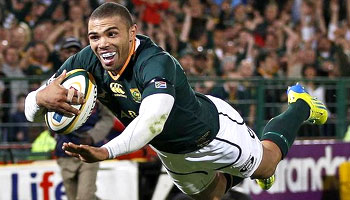 Bryan Habana scored a hat-trick of tries as the Springboks dominated a battered Wallaby side at Loftus Versveld on Saturday. The home side scored five tries to one in a 31-8 rout, as they look to end their Rugby Championship campaign on a high.

The Springboks fielded two debutant starters in key positions, namely Johan Goosen at flyhalf and Jaco Taute at second center, but it only served to improve their game as they willingly spread the ball, playing a brand of rugby that South African fans have waited a long time to see.

They have since denied there was a change in game plan, but the exclusion of Morne Steyn seems to have made a difference to the general attitude with ball in hand. Goal kicking was still a concern though as they missed four of their first five kicks at goal. On this occasion it was fairly irrelevant though as they were comfortable in most other facets of the game, and led 14-3 at halftime.

The Wallabies went into the game with a late change forced through injury, and that set the tone as it looked like a battlefiend out there, with one horrible knock in particular for courageous Adam Ashley-Cooper, who saved a try, but left the field on a stretcher.

With ten minutes left they had made their alotted seven substitutions, so as if an earlier yellow card to James Slipper wasn’t enough to deal with, they were unable to bring on another player, so played the last ten with just 14 men on the field.

The Springboks took full advantage of both instances, scoring some lovely tries as Francois Louw combined with super-charged Habana on more than one occasion, and they had a third try ruled out by the TMO in the second half after great runs from Jean de Villiers and Ruan Pienaar.

In the end the scoreline could have been a lot worse for the visitors, as their resources were severely depleted and they are now in a situation where they have to travel to Argentina for their final Rugby Championship game, but will struggle to put together a full squad.

A bonus point win over Argentina, and a loss by South Africa to the All Blacks, would mean that the Wallabies could still finish in second place though.