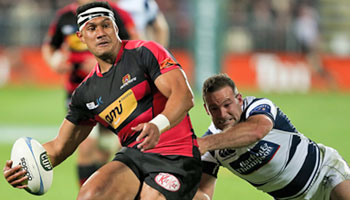 Auckland struck early before the hosts hit back, but a certain try was snuffed out by a deliberate tap down from Canterbury winger Telusa Veainu shortly before halftime. Referee Jackson sent him to the sinbin, and despite a three man overlap, opted against awarding a penalty try.

Auckland were 13-10 up at the time, but instead went into the break trailing 15-13. Coach Wayne Pivac wasn’t happy, but Jackson said that without the aid of a replay, it was a tough call to make.

“I think Wayne’s definitely got a reason to bring that up. I have had a look at it and I think there was one guy coming across but, three on one, 20 metres out – and that’s the beauty of the replay – he’s probably got a good argument there,” Jackson told Radio Sport.

“I didn’t actually know who was behind in terms of cover, and that would have made the biggest difference. Five metres out, you can see that quite clearly.”

Canterbury scored again in the second half after Andy Ellis snatched the ball from the base of a ruck after it appeared that Jackson had initially told him he had no rights to. Auckland were livid, but Jackson explained what happened afterwards.

“Andy was never in an illegal position to play. At the time, the ball was still in the ruck. And when I said no, he didn’t go, then the ball actually came clear. It is disappointing that it’s come up that I said no, but Andy had all rights to carry on and do what he did.

“Hence why, when he did actually play at the ball, we played on,” Jackson added.

Tom Taylor ended the game with 23 points and while Auckland scored a late consolation try, it was their only points of the second half and Canterbury went on to celebrate another famous win.