Cardiff Blues edge out Toulouse at the Millennium Stadium 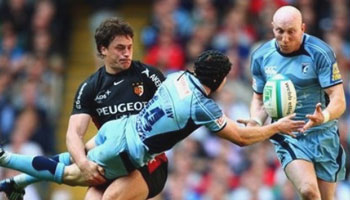 Kiwi Ben Blair booted Toulouse out of the Heineken Cup with his three penalties that ultimately proved the difference in this tight quarter final match in Cardiff. The incredible defensive effort of the Blues though was what ultimately produced the 9-6 victory.

The loss for Toulouse, last seasons runners up, means that there will be no French semi-final representation for only the second time in the Heineken Cups 14-year history.

The Blues are now a transformed side from that who received a 41-17 hiding from the same opposition last year. They kept their composure to hang on for the win in this thrilling, yet low scoring match.

“Everyone has been giving the extra yard and this result against Toulouse just shows the hard work that is going in,” said big Blues center Jamie Roberts.

“All the boys were out on their feet, which showed the effort everyone put in.

“It was a mighty defensive effort, especially during the last 20 minutes. I just kept looking at the clock, every minute it seemed, just waiting for it to end.

“It was like a Test match – extremely physical, very quick and very hard on the body.

“And it was very special. The fans were fantastic and I think they pulled us through that last 20 minutes.”

The Welsh side will meet Leicester early next month, also at the Millennium Stadium, to see who goes through to meet either Munster or Leinster in the final at Murrayfield.